In fluid dynamics, turbulence or turbulent flow is a flow regime characterized by chaotic property changes. In turbulent flow, unsteady vortices appear on many scales and interact with each other. This is because turbulence dissipates rapidly as the kinetic energy is converted into internal energy by viscous shear stress. In this sonic composition, we hear an interpretation of how turbulence, created by tip vortex flow coming off a propeller, might sound in the medium of water. The propeller is under a constant RPM and torque.

Turbulence pervades the universe, being found in stars, stellar winds, accretion disks, galaxies and even the material between galaxies. It also plays a critical role in phenomena such as propeller vortex flow (coming off the rear of a spinning propeller, say, in water) and wake turbulence (which forms behind an aircraft as it passes through the air).

In turbulent flow, unsteady vortices appear on many scales and interact with each other. Drag usually increase due to boundary layer skin friction. The structure and location of boundary layer separation often changes, sometimes resulting in a reduction of overall drag.

Turbulent flows have non-zero vorticity and are characterized by a strong three-dimensional vortex generation mechanism known as vortex stretching. In fluid dynamics, they are essentially vortices subjected to stretching associated with a corresponding increase of the component of vorticity in the stretching direction—due to the conservation of angular momentum. In general, the stretching mechanism implies thinning of the vortices in a direction that is perpendicular to the stretching direction due to volume conservation of fluid elements. As a result, the radial length scale of the vortices decreases and the larger flow structures break down into smaller structures. The process continues until the small scale structures are small enough that their kinetic energy can be transformed by the fluid’s molecular viscosity into heat. This is why turbulence is always rotational and three dimensional. 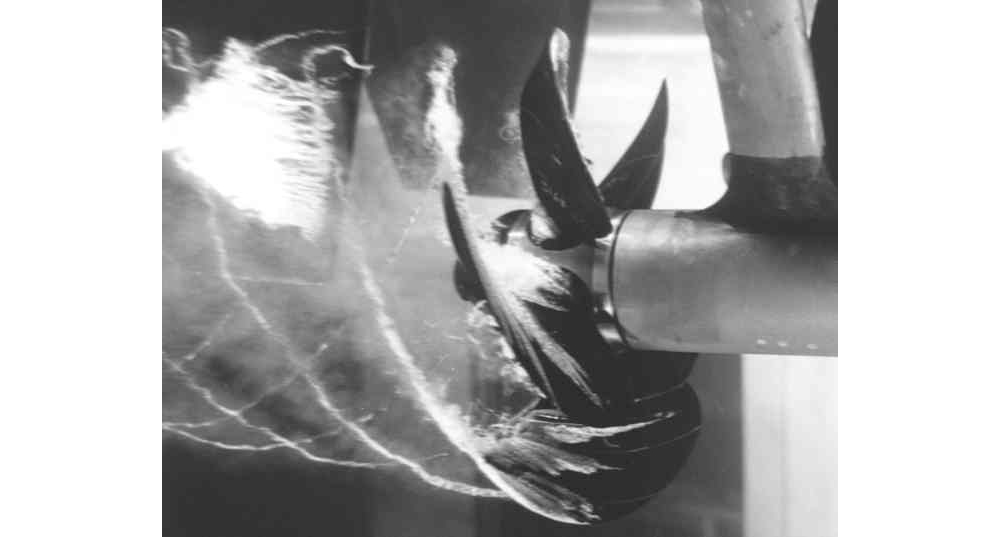 This piece is a composition that was created using a Max 7 patch. It mimicks the sounds that might be heard from an underwater propeller turning at a constant RPM and under a steady torque. Some of the pops one can hear from time to time are similar to cavitation, which is the formation of vapour cavities in a liquid. As you can hear, turbulent flows are always highly irregular and, in order to sustain a turbulent flow, a persistent source of energy supply is required – hence the constant RPM and torque.