Recording a yoga instructor’s crystal singing bowls just before and during the COVID-19 pandemic posed an interesting challenge for us here. Verity wanted to know if the sound of her singing bowls could be captured well enough to preserve the intention with which they were played. Recording Tibetan singing bowls with various stereo microphone techniques in the past had proved difficult, if only because most stereo microphone arrays didn’t always capture the direct signal alone, nor did many translate well when converted in to mono signals.

Toward the end of 2019, Verity Curtis approached us with the idea of recording her high quality crystal singing bowls that she had acquired from “The Temple of Alchemies” in Greenwich, London. She was essentially just beginning her journey into sound healing with the use of these special bowls, and had been offering sound baths of pure tonal wonder to small groups of people while they simply lay down and experienced the blissful energies around the resonances and interplay of sound waves being woven under Verity’s heartfelt guidance.

Being a well travelled Buddhist, I had been fortunate enough to record Tibetan singing bowls at various monasteries across India and Nepal over the years, and had learnt a fair bit about what to do, and what not to do, when capturing the shimmering tonal interplay of vibrations emanating from a collection of bowls played at the same time in one location.

When first recording singing bowls out in the field the A-B (or ‘spaced pair’) technique was used. This makes use of a spaced pair of omnidirectional microphones (Streicher & Alton Everest, 1998, p. 9.5). The space between the microphones and their relative positioning to the sound source, so it was soon discovered, is very important when recording with this technique. After the optimal position for the microphones was determined, the resultant stereo recordings usually turned out rather well i.e. the sound image was well spaced in the stereo field and allowed the rich harmonics of the lower frequencies to be heard with good detail. However, when these stereo recordings were summed into mono signals, there was usually a substantial amount of comb-filtering and, as a result, the playback signal suffered from regular drop-outs and unusual tonal shifts and anomalies. With each new venue, I found that by placing the stereo microphones in different positions, one could play around with the balance between the direct sound (coming directly from the singing bowls) and diffuse soundfield (the sound of the instruments that bounced off surfaces in the space where the recordings were made). During this procedure, a few optimal spacings and positions for the pair of omnidirectional microphones (usually two Sennheiser MKH-20s) would be determined which minimised the effect of comb-filtering. However, finding that optimal placement for the microphones seemed to vary so much from location to location, not to mention the changes in the type of singing bowl i.e. different materials and shapes, that each new venue and ‘instrument’ (or ‘instruments’) would require at least a good half an hour (or more) to set up optimally. Further to this, comb-filtering of some kind could never be completely eliminated. Thus the AB technique was dropped fairly early on as a method of recording singing bowls.

Similar experiences with the ORTF (Office de Radiodiffusion Télévision Française), DIN (Deutsches Institut für Normung) and NOS (Nederlandse Omroep Stichting) were noted, whereby the stereo image of the bowls was well caught, not to mention the tonal details of the varying frequencies and textures from each bowl was well preserved in the soundfield (Streicher & Alton Everest, 1998, pp. 9.1-9.4). However, there would always be some type of comb-filtering going on in any venue and, when positioning the microphone arrays to minimise this, I would again usually invest well over half an hour of moving the array (and, if possible, the sound source) around to optimise the signal for making the recordings. I won’t go into too much depth about comb-filtering and positioning of microphone arrays here, as the technical and scientific premise centres around wave theory and would require a lengthy essay to tackle the specifics. In addition, there were several times where we arrived with little time to spare before a performance and, in order to determine the best mic position, the performers found playing for 30 minutes before a performance would be tiresome, leaving them feeling unrefreshed and prosaic. Thus, a different way to record the bowls was urgently needed.

One broad type of stereo microphone technique that we knew would not be overly affected by comb-filtering or microphone placement, and would not be affected when summed into a mono signal, were ‘time coincident pairs’ or ‘time coincident arrays’ (Streicher & Alton Everest, 1998, p. 7.20). Having previously utilised both the XY (which utilises a pair of first-order cardioid microphones that are arranged at a 90° angle to one another’s axis, with the capsules placed directly over one another, only 5mm apart) and the MS (which utilises a cardioid microphone and one figure-of-eight microphone, again, with capsules placed directly over one another in a similar manner) microphone arrays to record singing bowls with great affect in monasteries, we decided it would be a good place to start when recording Verity’s performances in the studio (Streicher & Alton Everest, 1998, pp. 8.6-8.15). This meant that we could place the arrays pretty much anywhere in the studio without worrying about comb-filtering, plus Verity could solely focus on her performance (as opposed to also playing for ~30 minutes to find a suitable position – and spacing – for the microphone array). 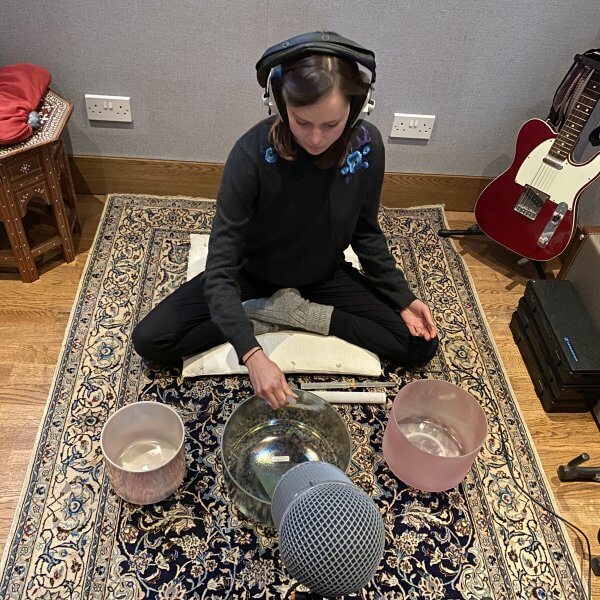 1) Verity Curtis recording at The Orange Hut studio in 2019. 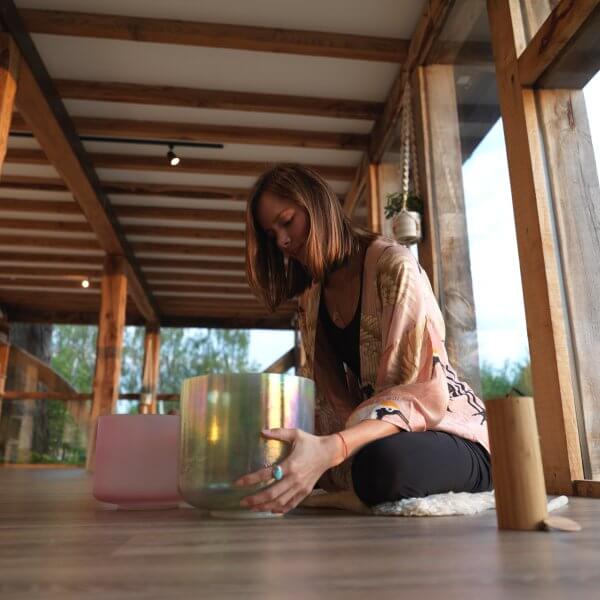 2) Arranging the singing bowls in the studio at Kingdom in Penshurst. 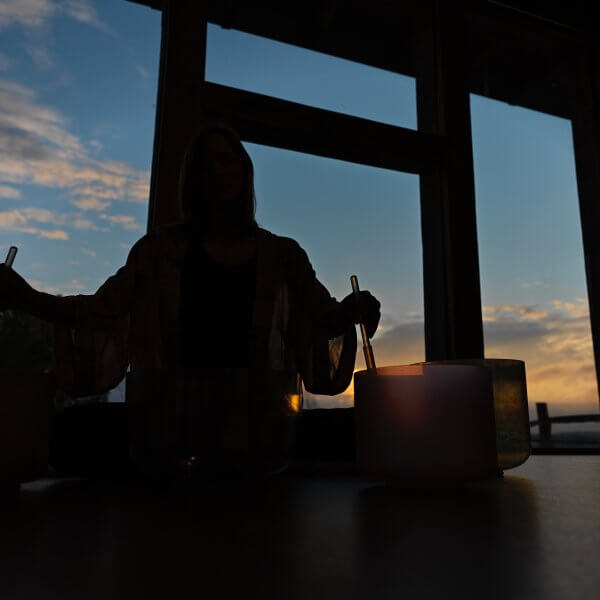 3) Playing a short performance for the camera in the summer morning sun.

The first time Verity arrived in the studio, we got a sense of how she spaced her bowls around her. As such, we initially decided to set up an XY coincident pair (made up of two Sennheiser MKH-40 cardioid microphones) of microphones, each mounted on a separate stand, to record her performance. This allowed us to suitably capture the positioning of the various bowls placed around her in the stereo field. While this microphone technique sounded good, I realised that the XY microphone array was probably too close to her bowls as, when listening back to the recordings we made one afternoon, Verity noted she could hear the silicon “wands” rubbing on the side of the bowls. While I liked this effect, Verity said she wanted to avoid this sound as it detracted one’s focus from the pure tonal sound coming from the bowls. Placing the XY microphone array only slightly further back left us with little space to move about in the studio, mainly due to the two microphone stands that were needed to hold each of the cardioid microphones in place. Neither did it prevent the sound of the “wands” rubbing the edges of the bowls from being heard. As such, it was decided an MS microphone array (made up of a Sennheiser MKH-40 cardioid microphone and a Sennheiser MKH-30 figure of eight microphone) would be better suited given spacial constraints. As we had a spare MS Rycote windshield cradle that required the use of only one stand, it allowed us more freedom to play around with the positioning of the microphone within the limited studio space to find an optimal spot. 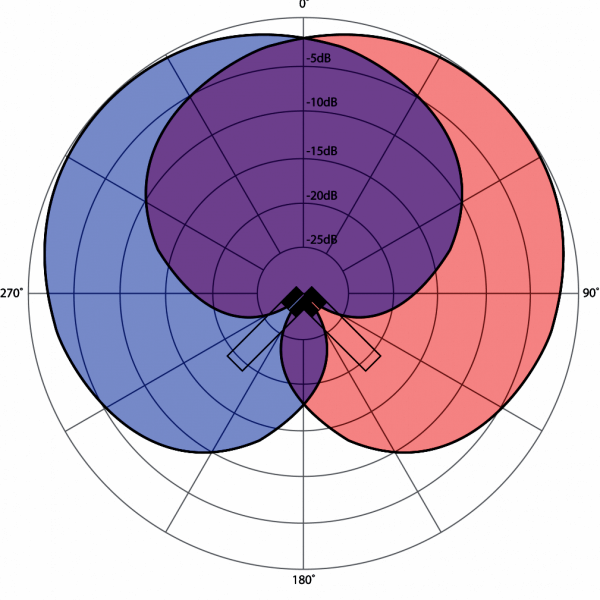 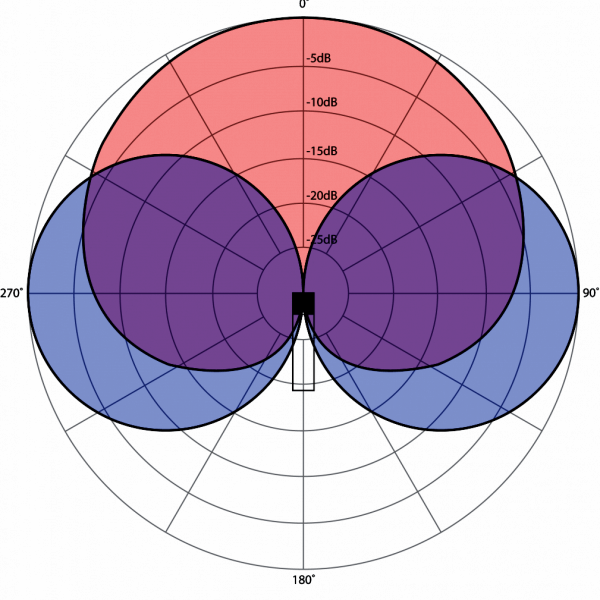 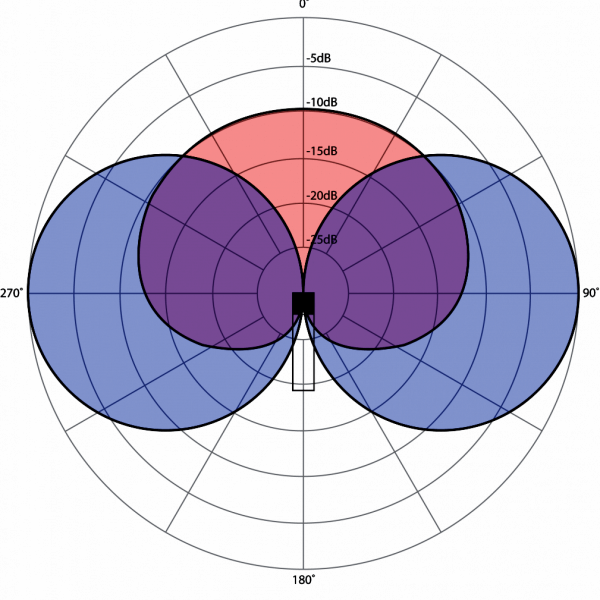 In any situation, it really always is down to personal preference as to what type of microphone technique one ultimately chooses to record with. When comparing the XY and MS recordings back-to-back in a blind playback test, we settled on the MS array, mainly as it sounded better. By “better” we mean it produced a more accurate representation of what one hears when seated in front the bowls during a live performance i.e. the way the sound shifts around a space as a result of the aural interplay of frequencies, as tones rise and fall in amplitude and cause interference phenomena (Streicher & Alton Everest, 1998, p. 7.20). Later, while recording and mixing other projects for Verity, we realised that the MS technique also afforded us the ability to adjust the width of the stereo field in each recording during mix-down, so we could experiment with the tonal interplay between the bowls, especially when “beat frequencies” became apparent in certain parts of a recording. “Beating” usually arises when two sound waves of differing frequency approach your ear or microphone, and the alternating constructive and destructive interference causes the sound to shift rhythmically between ‘soft’ and ‘loud’ (Stevens, Warshofsky, 1967, p. 12). This was commonly heard during Verity’s performances.

The first MS recording made at the studio:

While recording at Kingdom on the 28th of July 2021, we decided to utilise an Ambisonic microphone rig (a Soundfield ST450 MKII, which we had hired) to capture Verity’s early morning performance in the yoga studio. However, because she needed to video this performance, there were limitations on where we could position the microphone for optimal sound capture without the microphone showing in the frame. As such, the recording didn’t quite turn out as well as had been hoped. That aside, when constraints are absent, my guess is that this microphone array will produce superior recording in the studio.

All in all, it was a lot of fun to record with Verity over the course of the COVID-19 pandemic, as well as help her remotely webcast some of her yoga and singing bowl sessions for some of her practitioners during the course of the various lockdowns. We will be keeping an eye on her as we believe she has a genuine talent there, and a bright future ahead of her. I sincerely hope we will record with her again one day. If you would like to learn more about Verity’s adventures into sound and/or attend one of her sound therapy sessions, please click here.