Polynomial was originally formed in 2002 by two friends, Matthew Daughton and Karl Richard.

Soon after being introduced by their mutual friend Simon Ng, Matthew and Karl discovered they shared a deep fondness for the sonic arts. By exchanging their favourite artist’s work with each other – ranging from the drone-like compositions of The Hafler Trio, Merzbow, Bad Rabit, Boris, Pan Sonic and Sunn O))) through to more mainstream sounds, such as NIN, dUES, Pearl Jam, Sonic Youth, Global Communication, Aphex Twin, Tangerine Dream, Tom Waits and Holst – they began to develop a basis for their own novel compositions.

In 2002, while listening to an album by NIN, entitled “Things Falling Apart”, they both reached a similar view: music is – in its own way – iterative. Just as an iteration in mathematics may refer to the process of an iterative function (whereby one applies a function repeatedly, using the output from one iteration as the input for the next, ad infinitum), they began to see the temporal extrapolations of melodic form that originated from a musician’s mind to be much like a mathematical function: each change iterating previous rhythmic and melodic structures within the confines of certain metres to create variation and dynamism. As such, they began to arrange ideas from other sonic artists’ works into new phonic outputs of their own. This is why the Mandlebrot set (a fractal* plot in the complex plane) holds such deep significance for Polynomial: it is infinite in resolution and, thus, holds infinite patterns of possibility within a finite bound. 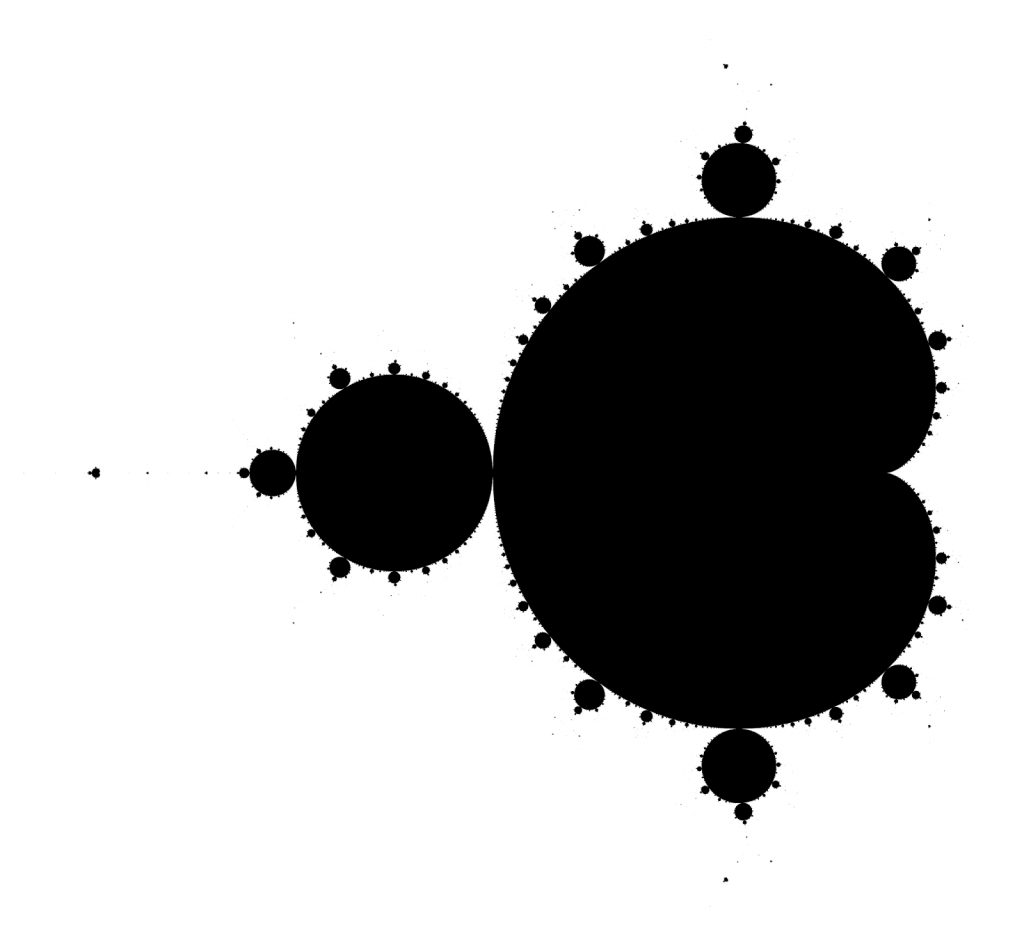 The Mandelbrot set in pure black and white; only pixels considered “inside” the set are black.

Soon after their meeting, Matthew and Karl began collecting electronic instruments and recording gear while devouring and analysing every morsel of musical form that happened to pass their way. During this exercise they started writing, arranging and producing their own sonic creations, initially just for their own aural interest.

Sadly Matthew passed away in April of 2006. To find out more about Matthew Daughton, please visit his site here: http://www.mattsite.org/

Karl is still composing music and experimenting with sound art and sound design possibilities, as well as writing about his own novel discoveries and thoughts concerning experience i.e. how his own body’s “seemingly aware” biochemistry relates to this universal flow of experience and pattern unfolding around him daily.

Here we present several heavily modulated compositions that were completed by Karl soon after Matthew’s passing. These were all composed, programmed and mixed at The Orange Hut using the Symbolic Sound Corporation’s Kyma software and Apple’s Logic Pro.

* Theoretical fractals are infinitely self-similar, iterated and detailed mathematical constructs, all of which have a fractal dimensions. There are many examples that have been formulated and studied in recent years since the advent of computers: IFS fractals, Base-Motif fractals, Dusts & Cluster fractals, Julia sets, Mandelbrot sets, Quaternion fractals and Strange Attractor fractals, to name but a few. Fractals are not just limited to geometric patterns alone. They can also describe processes in time too. Fractal patterns with various degrees of self-similarity have been rendered or studied in images, structures and sounds and found in nature, biology, technology, art and law. The amazing details and beauty seen within some of these fractal forms, as well as the fact that they are found in most natural phenomena the universe over, have led to some mathematicians, scientists, philosophers and theologians naming them “The thumb print of God”, as if they might allude to a divine creator.