In 2016 I was contacted by Leslie Nguyen Temple and asked to watch a documentary film that they had made about their work with giant appliqué thangkas in Tibet. After watching it at her home, she specifically asked what I thought about the film’s sound quality. Re-watching it with her, we both highlighted several aspects of the sound quality that would need to be worked on before releasing the film. Over the next few years, this became an ongoing project that I felt impelled to work on, not only for Leslie and Terris, who’s work and efforts the film was centred around, but also for His Holiness the Karmapa, whose wish was to share the merit of this work with the world through this short film.

Soon after watching the film with Leslie Nguyen Temple, I was contacted by Terris Nguyen Temple and we began a dialogue that allowed us to start looking at the film’s soundtrack in the studio and plan what was needed to re-mix the sound track.

Initially Terris only provided me with the overall mix from the film i.e. all the narration, room tone, music as one stereo track. After listening through this mix, we quickly realised that we would not be able to clean the audio (removing unwanted clicks, sounds, or re-EQ narration, etc.) without drastically affecting everything else in the mix. As a result, I requested copies of all the original film clips (with their respective sound files) that were used in the film, along with all the music and footage that had “room tone” on. This proved to be a time consuming process, mainly as many of the original clips were located across the globe i.e. some were in Thailand (where the narration was originally shot) and other parts were in Hawaii (where Terris lived most of the time). 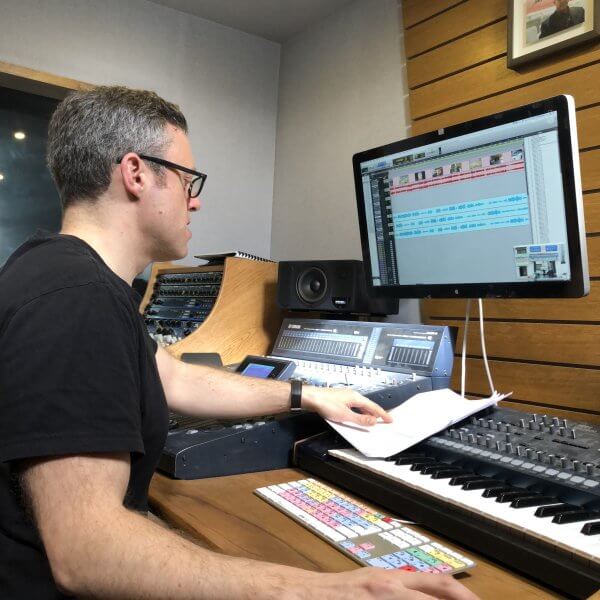 1) Karl flowing the script as Terris performs voice-overs in the studio next door. 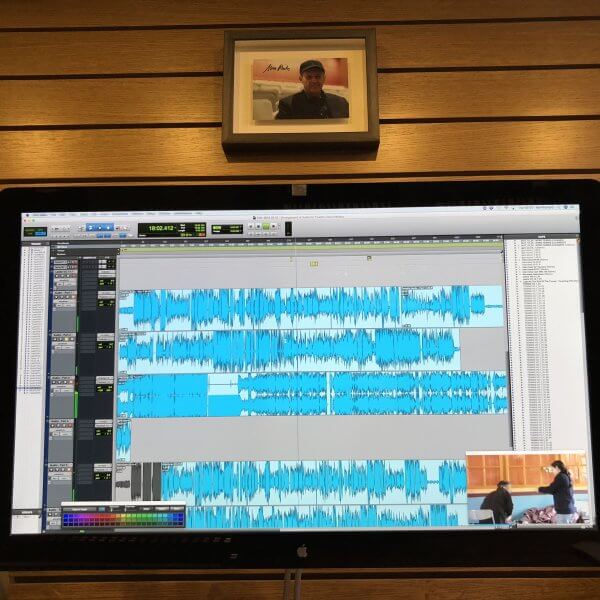 2) Rough arrangement of files for the rough cut of the documentary in ProTools.

3) Terris on the studio floor searching for various clips and footage from which to extract audio.

After several months of meticulously looking through the files of film footage as it came in to my inbox, we were able to isolate a lot of the original “room tone” recorded with the original video camera they had been given by friends while working in Tibet. After isolating the film sound from these .MOV files, we realised that most of the film clips were at slightly different speeds to the cut of the film that we were working on. As a result, we could not simply drag and drop them into the ProTools soundtrack arrangement. Plus, as there was no timecode on these recordings, we spent about a month and a half working through the room tone files and narration, adjusting the timing of the audio manually, painstakingly matching it to fit the speed of the film’s cut. While doing this, we began roughly arranging the narration and room tone into the ProTools soundtrack session. Once we finished the rough arrangement, we soloed the audio files individually and began cleaning some of them up i.e. removing background noise and any clicks or hums that were present. We did this manually using Isotope’s RX software. During this process, we realised that some of the audio – which had been recorded on the balcony of a flat in Chang Mai, Thailand – was beyond ‘repair’ and, as such, would need to be replaced. To do this, we performed a series of overdubs with both Terris and Leslie, and then rearranged these new recordings into the original sound footage. These were then ‘EQ matched’ to the original narration’s tone.

It should be said, re-recording narration for a film is not as easy as it may seem. We were met with various challenges while do this. Trying to co-ordinate everyone within their busy daily routines meant that there were few windows to meet up. Also, while it would have been better to record the narration in the studio, there were times where we would have to visit Leslie in her home and make recordings there. Furthermore, the spontaneity of what was said originally sometimes brought enthusiastic inflections that were hard to reproduce in other settings. Also, in and around this work, Terris adjusted some of the footage to create a new “Final Cut”, different from the one we were originally working on. This meant that we needed to re-adjust (and re-write) some of the narration to fit into scenes that had been changed.

Once this was done, Terris’ “Final Cut” was used to synchronise all the audio files to the footage manually. After, we made a rough mix of the narration and room tone to send to Terris and Leslie for their thoughts and comments.

The next aspect of the film’s sound that we focused on was the score. Originally this comprised of a series of ‘Royalty Free’ tracks that Terris had sourced from various online websites, and some other tracks that the original editor of the film had included. Once Terris provided us with all the song files, we used “Shazam” just to check the origin of the tracks to see if they were “royalty free” or whether they belonged to an artist or publisher. After checking several unknown tracks, we discerned that some of them belonged to artists and publishers whose permission we would need to seek in order to utilise them. As such, we spent about a month contacting the artists and publishers. However, a lot of the publishers were asking more than the film’s original budget and, as such, Leslie and Terris had to drop them from the film.

A month or so later, Leslie found a local sound artist (Andrew Greaves) (who she knew fairly well) and asked whether he might be interested in making a new film score for their documentary. Very kindly and obligingly, Andrew agreed and within no time at all came up with a novel and highly relevant film score that beautifully complemented the documentary’s subject matter and setting. Andrew had a clear vision of how these tracks should be arranged in the documentary and, as such, we met in the studio on a couple of occasions to arrange them.

Several so-called “Amdo” tracks, which were songs that Leslie and Terris had recorded from the radio while working in Tibet, were used in this film’s soundtrack. While every effort was made by Terris to source the artists (and names) of the tracks, none of the composers of these recordings, nor any record label details, were found.

Once all these components were added to the film’s footage, a rough mix of all the elements was made, isolating all the respective parts into various ‘stems files’ i.e. a stereo narration stem file, a stereo room tone stem file, a stereo film score stem file, and a stereo “Amdo” music stem file. Another mix of these was then sent to Leslie and Terris for comments and thoughts.

Soon after the rough mix of all the elements was sent to Terris and Leslie, Terris presented us with a new cut of the film. While the new cut had only about two minutes of adjustments towards the end of the footage, re-syncing the sound involved a lot of painstaking work as some of the minor adjustments made in the film meant the whole film had been nudged slightly out of sync with the original audio; enough so that we had to move the majority of the film soundtrack around to re-sync it all again. Around this time, the pandemic struck and lockdown scuppered a lot of our efforts to meet up and work on this project.

Due to time constraints and other obligations, we were sadly not able to finish the soundtrack for the last revised cut of Terris and Leslie’s film. We know that Terris is currently working on completing it with a friend in the US and we very much hope to see it when it is done.

If you would like to learn more about this film, entitled “Tsurphu – the Giant Appliqués”, then please click here.