In honour of the late Edward Lorenz, I proffer the following brief insight into his life's work and, by way of a sonic offering, hope to honour the legacy that he left the worlds of mathematics and science.

It is the findings and implications gleaned from Lorenz‘s body of works that has so inspired me to study how their implications could be translated into creating sonic forms of art. As a result, I feel much the wiser for having glimpsed at the workings behind many of the ‘irregular’ or ‘irrational’ ebbs and flows that characterise certain so-called “non-linear” dynamical systems.

While the significance of the way various basins of attraction interact with another would naturally have come to light at some point within the scientific community (it was something that was first alluded to by Jules Henri Poincaré), it was Lorenz’s work which hastened the inevitable birth of a new science proper – namely the science of non-linear dynamical systems – and so propounded a better analogy with which to understand the unpredictable eddies of chaos that swirl around us all daily.

In summary… The Lorenz attractor is a fractal structure corresponding to the long-term behaviour of the Lorenz oscillator. The Lorenz oscillator is a “3-dimensional” (it has three variables) dynamical system that exhibits chaotic behaviour, and is well noted for its ‘lemniscate’ shape (a term used in algebraic geometry to refer to an object that has a likeness to the figure eight’s form).

The oscillator was originally used by Lorenz as a simplified model for determining how convectional weather patterns would unfold within the earth’s atmosphere. The Lorenz Attractor map (see both figures 1 and 2 below) shows how the state of a dynamical system (the three variables interdependently fluxing through time within a 3-D phase-space plot) evolves in a complex, non-repeating pattern. 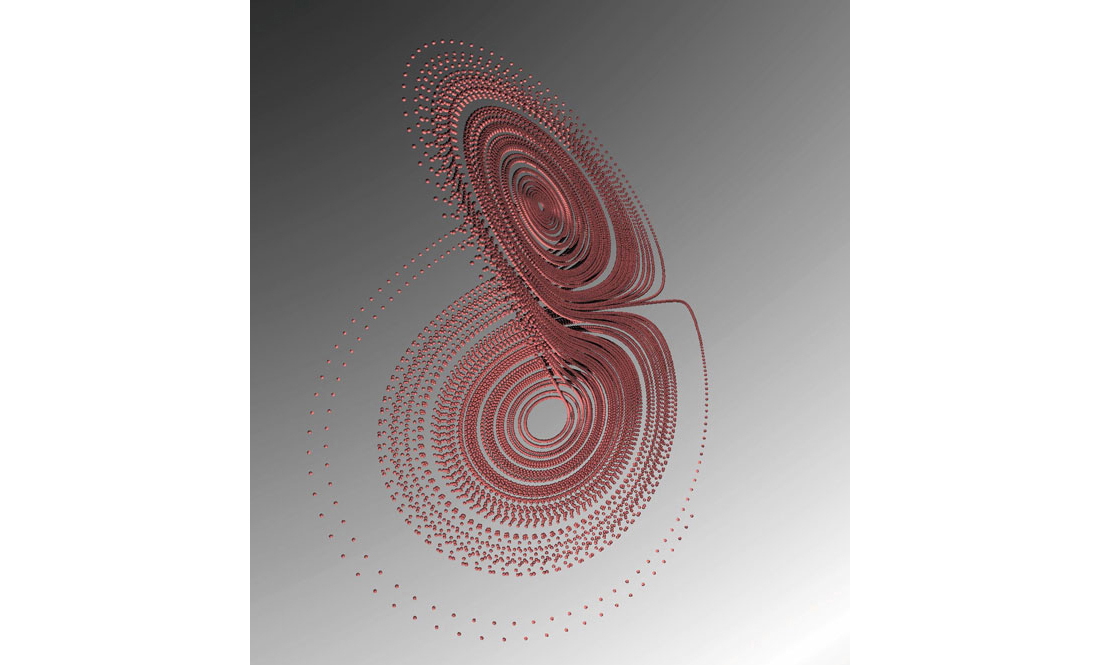 Figure 1. This image appeared in the Nature journal on 31 August 2000, pp 949 as part of an article titled “The Lorenz Attractor Exists”, written by Ian Stewart. It was created as part of an OpenGL interactive viewer and rendered on a farm of Dec Alphas using ProRay. Source: As above

In 1961, Lorenz had managed to create a skeleton weather system from a handful of differential equations. He kept a continuous simulation running on an extremely primitive analog computer that would output a day’s progress in the simulation every minute as a line of text on a roll of paper. Evidently, the whole system was very successful at producing “weather-like” output i.e. nothing ever happened the same way twice. Yet, there was an underlying order that delighted Lorenz and his associates.

…Line by line, the winds and temperatures in Lorenz’s printouts seemed to behave in a recognizable earthly way. They matched his cherished intuition about the weather, his sense that it repeated itself, displaying familiar patterns over time, pressure rising and falling, the air-stream swinging north and south. (Gleick, 1997, p. 15)

What Edward Lorenz had discovered was a chaotic system. Even though a computer had control of the simulation, and certainly possessed the capability to generate random numbers at will, there was nothing random about any portion of the way the simulation was supposed to work. It merely followed the laws of calculus as set down by Sir Isaac Newton himself and outputted a day’s worth of virtual weather at the end of each minute. Lorenz’s initial brush with chaos is described best by James Gleick’s own words, from Chaos:

One day in the winter of 1961, wanting to examine one sequence at greater length, Lorenz took a short-cut. Instead of starting the whole run over, he started midway through. To give the machine its initial conditions, he typed the numbers straight from the earlier printout. Then he walked down the hall to get away from the noise and drink a cup of coffee. When he returned an hour later, he saw something unexpected, something that planted a seed for a new science. This new run should have exactly duplicated the old. Lorenz had copied the numbers into the machine himself. The program had not changed. Yet as he stared at the new printout, Lorenz saw his weather diverging so rapidly from the pattern of the last run that, within just a few months, all resemblance had disappeared. He looked at one set of numbers, then back at the other. He might as well have chosen two random weathers out of a hat. His first thought was that another vacuum tube had gone bad.

Suddenly he realized the truth. There had been no malfunction. The problem lay in the numbers he had typed. In the computer’s memory, six decimal places were stored: .506127. On the printout to save space, just three appeared: .506. Lorenz had entered the shorter, rounded-off numbers, assuming that the difference-one part in a thousand-was inconsequential.

It was a reasonable assumption. If a weather satellite can read ocean-surface temperature to within one part in a thousand, its operators consider themselves lucky. Lorenz’s Royal McBee was implementing the classical program. It used a purely deterministic system of equations. Given a particular starting point, the weather would unfold exactly the same way each time. Given a slightly different starting point, the weather should unfold in a slightly different way. A small numerical error was like a small puff of wind – surely the small puffs faded or cancelled each other out before they could change important, large-scale features of the weather. Yet in Lorenz’s particular system of equations, small errors proved catastrophic. (Gleick, 1997, p. 16)

And there is the show-stopper: small errors prove catastrophic! After this realisation, Lorenz published a paper in 1972, entitled “Predictability: Does the Flap of a Butterfly’s Wings in Brazil Set Off a Tornado in Texas?”, and the title stuck. Today, sensitive dependence on initial conditions is referred to as “The Butterfly Effect.”

For the purposes of experimentation, Lorenz created a new way of understanding dynamical systems with a coupled set of differential equations:

It was a reduced model of convection, similar to the swirls of cream in a hot cup of coffee, only much, much simpler. And yet, the shear complexity, along with the never ending richness of form it generated, demonstrates the sovereign and almost “God-like” majesty that lies behind two simple basins of attraction… The resulting unpredictability woven into their subtle networks of force that exert an effect on each other are truly startling!

Ever since my first glance at one of these visual phase-space extrapolations, I have had a deep sense of longing to port this ideal into the sonic realm, if only to investigate abstract rhythmic and tonal form. However, I couldn’t help wonder whether listening to the chaos inherent within non-linear dynamical systems might, in some way, reveal a deeper insight into the workings of Strange Attractors… ?

Figure 2. Another Lorenz Attractor. Source: Taken from the webpage relating to CS142 Topics of Willamette University in Oregon, USA

Here we offer some snippets from an on going project called “Non-Linear”. This project affords us the chance to port over some of the visual ideas seen above i.e. temporal data flowing through a 3-D phase space, into sonic gardens of chaotically grown rhythms and tonal modulations.

While some of these recordings will no doubt embody visceral abstractions that could easily be associated with the notion of ‘chaotic’ flow, others will have a more musical mode to them. This is the result of some melodic intervention on our part. Nonetheless, non-linear systems still reside at the core of these compositions and, thus, despite their preternatural arrangements, the basis for chaos can still be found lying deep within their structure.

For us, it is the chaos inherent in the programming that allows us to discover novel and diverse fragments of rhythmic undulation that we can then assimilate into sonic forms… And, just as the non-linear dynamics inherent within our body’s own biological system provides an impulse of intricacy that gives rise to the complexity of Life, so we see a type synecdoche functioning within our work that eludes to the notion of “consciousness” itself. Might one even say that our guidance in creating is derived from that universal flow that many call “God, or Nature“?

Many thanks to the late Edward Lorenz. R.I.P.